New Year’s Day is usually a time to look ahead.  It is also a good time to look back and reflect.  A most notable event occurred: the awarding of the Nobel Peace Prize to two extraordinary advocates for children.  The Nobel Committee announced both winners, Malala Yousafzai and Kailash Satyarthi, in October; in December, both were honored publicly.

Malala Yousafzai is world famous for continuing to advocate for the education of all children, especially the poor and girls. She was shot and left for dead by Taliban extremists for an everyday act children around the world perform: going to school.  In fact, these rights are enshrined in Articles 23 and 28 of the U.N. Convention on the Rights of the Child.  And it is for her advocacy more than her victimhood for which Malala is so widely admired.  She gave an impassioned speech.

Kailash Satyarthi has dedicated the last 30 years of his life freeing more than 70,000 of India’s children from the slavery of child labor.  Child laborers, of course, are also denied the right to and education – and a future.  The New York Times wrote about him on October 10.  He gave a humble speech, reflecting his Gandhian dedication to enduring peaceful change.

A Pakistani Muslim and an Indian Hindu – “the choice seemed to speak to a desire to transcend differences and forge a common campaign in support of dispossessed children across the globe,” said Alan Cowell in a beautiful tribute to the pair when they were officially honored on December 10.  This historic event was certainly in the spirit of Janusz Korczak. 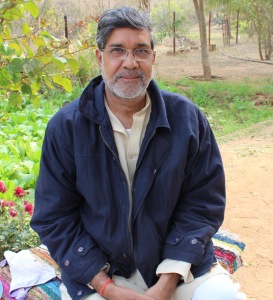